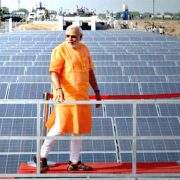 India’s Prime Minister has over 14 million Instagram followers. Narendra Modi’s Twitter following is even larger. Nearly 44 million receive live updates from Lok Kalyan Marg, the PMs official residence. The conservative leader is “with it.” A green revolution is never far from mind.

As a result, his vision of a nation pushing for modernization has few coal mines. It’s rare that a country of 1.3 billion agrees on anything. An exception: pollution levels.

The government has been vocal about changing this. However, few bought the hype when it echoed China’s goal of 100% electric vehicles (EVs) by 2030.

Nearly 22% of Indians live below the poverty line The Green Revolution can bring about major social change

Yet, the world’s largest democracy owns the world’s 6th largest economy. As a result, its size is cause for optimism.

Nevertheless, massive slums are everywhere. They are home to over 100 million. Any revolution – especially a green revolution – would greatly improve the overall quality of life.

This is a far cry from the original goal, but a realistic approach is needed.

To achieve this goal, the country will support private, corporate and government partnerships. A Better India for the Next Generation

Even worse, 30% of the world’s poorest children live in India. Child labour is common and sanitation levels are unacceptably low. The rickshaw changed transportation nationwide. They are 3-wheeled, door-less vehicles that allow for increased mobilization. Many of these vehicles run on natural gas (CNG), a market that has diminished in recent years.

While this transition from two-stroke engines reduced overall emissions, it’s impact was small.

India is a developing country with an economy hampered by overpopulation and civil disorganization.

Besides, traditional values keep one-half of its workforce at home.

Where a Green Revolution is needed – A highway in Delhi, India.

Electrifying its auto-industry would reduce the global EV price. This would improve the average Indian’s quality of life.

A nation used to coughing its way out of bed would benefit from a green revolution.

Help is on the way.

Rideshare company OLA is adding over 10,000 electric rickshaws to its fleet in 2018.

The country produces over 500,000 rickshaws every year. Nevertheless, this represents a large shift.

India has much to be excited about.

Lithium-ion batteries are holding longer charges than ever. More countries are investing in clean transportation initiatives. Modi could set his country on a prosperous path.