Few people dislike the purr made by a V8 engine. However, the pollution these vehicles make is another story. Consequently, automakers have taken note. Most electric cars will feature artificial engine sounds.

READ: Are Electric Cars the Future of Transportation? 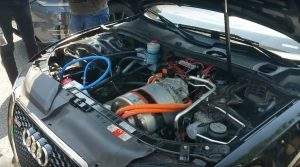 The sounds made by luxury vehicle engines aren’t natural. Instead, they’re engineered. Moreover, they speak volumes about an automaker’s identity. Additionally, an engine’s sound says a lot about a driver. As a result, this practice will carry over into the auto industry’s future. Meanwhile, automakers are tasked with making artificial engine sounds for otherwise silent cars.

For both Safety and Brand

Consumers can identify the roar made by a Harley-Davidson motorcycle on sound alone. Furthermore, Porsche, Ferrari, and other brands can also be identified in this way.

However, these sounds have a role to play beyond waking you up at 3 AM. Simply put, they prevent accidents. Sound is a pedestrian’s friend. Ultimately, automakers have taken notice. Major brands like Mercedes, Volkswagen, and Jaguar will engineer artificial engine sounds for EVs. 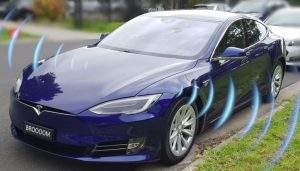 The task has changed the conversation around engine sounds. Previously, engineers needed to adapt engine parts to craft a pleasing noise. Now, we’re forced to question what a car is supposed to sound like. Meanwhile, auto trends suggest this will become a larger issue. Electric vehicle popularity rapidly grows.

Additionally, so does talk of the resources powering this global change. Most major automakers have released electric vehicle plans. Consequently, fueling this revolution becomes a monumental task. As a result, China’s invested massively in the global lithium supply – the movement’s most important resource.

As artificial engine sounds become a priority, so too will lithium mining and exploration projects. This global shift can be heard miles away.